Ashwagandha, also known by its scientific name Withania somnifera and by other common names like Indian ginseng, Indian winter cherry, or poison gooseberry, is a popular traditional Indian medicine and a modern dietary supplement. This plant, specifically its root powder, is a well-regarded and widely-used herb of the conventional Indian Ayurvedic system of medicine. In this alternative medicine system, ashwagandha is classified as a Rasayana or an herb that rejuvenates both the mind and body and fights aging as it increases lifespan. In modern times, it is used as a dietary supplement, usually in tablets, capsules, and even chewable gummies, mainly considered an adaptogen or an herbal pharmaceutical that supposedly assists the body to fight stressors.

Various researches confirm ashwagandha’s benefits as a Rasayana. Below are some of the benefits popularly attributed to ashwagandha until now.

Traditionally considered as a rejuvenator, ashwagandha is popularly known as a supplement against stress. This reputation is supported by several research studies that demonstrate how ashwagandha relieves symptoms of stress. In one study, participants who took ashwagandha had lower cortisol levels and a self-assessment of overall well-being and quality of life. Reducing stress will prevent other diseases induced by it like diabetes, hypertension, premature aging, and arthritis.

Ashwagandha is known to reduce inflammation of painful, swollen joints. One study found that using the plant’s root powder relieved joint pain and swelling, similar to the effects of using the traditional root paste for the same purpose. Another study has shown that this supplement increases immune or natural killer (NK) cells that help fight infections that can cause inflammation. In another one, a decrease was seen in C-reactive protein (CRP), which is another marker of inflammation.

Increase in muscle growth and strength 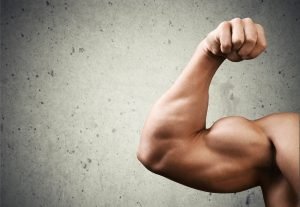 Some studies have confirmed the strengthening effects of this traditional medicine. Small-scale research shows that participants that supplemented with ashwagandha have increased volume in particular strengthening exercises and, in effect, significantly gained more muscle and lost more fat versus participants who just took a placebo.

Aside from muscle gains, another study found that the supplement can improve cardiorespiratory endurance. By testing Indian cyclists’ endurance with or without ashwagandha supplementation and subsequently measuring the participants’ maximal aerobic capacity (VO2 max), it was shown that those who supplemented have significantly improved their VO2 max, among other measures.

While studies have shown the supposed benefits of this herbal pharmaceutical, there are noted possible minor and tolerable side effects such as nausea, headache, sleepiness, stomachache, and diarrhea.

While there were no severe side effects that have been found in the clinical trials of ashwagandha, there have been various, alarming case reports on this herbal supplement, including the following:

Other potential side effects include:

Ashwagandha has been used for hundreds of years as a traditional Indian medicine and a modern-day dietary supplement. Several research studies have been conducted on this popular herb, associating it with various health benefits like reduced stress levels, increased muscle mass, and even cancer prevention. Aside from that, there are quite a few reported adverse effects noted across these research studies.

Male UltraCore Review: EVERYTHING You Want to Know! ALL SECRETS REVEALED!