Here are some of the differences science has found about men and women. These are overarching categories related to typical brains and all of these gender differences have both negatives and positives. Enjoy the list and have fun learning all of these differences between our two amazing genders.

As far as processing it’s all about the grey and white. Literally. The majority of men use nearly seven times the amount of gray matter than women. In contrast, the majority of women use nearly ten times as much white matter as men. But, what the heck does this all mean?

Well, let’s get to the astonishing truth. Gray matter within the brain is localized. These show in certain parts of the brain as complex information and action processing stations. This may lead to tunnel vision in men, which can lead to intense and highly-focused periods that can produce very high productivity, mastery of skills, and admittedly, frustration for others. For instance, men may become completely immersed in a video game, art project, or a task that just needs an intense amount of concentration. This is excellent for gaining a deep understanding of a task and completing it with excellent quality. 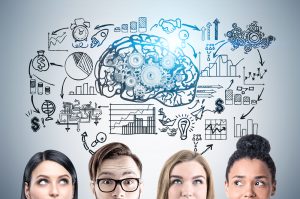 White matter, on the other hand, is the brain’s entire networking grid. It connects the gray matter and all other processing sections into one. This makes it easier for women to transition from task to task, keep track of multiple tasks at once, and make creative connections between two areas that seem unrelated. This can also lead to big-picture thinking and leadership skills as women are able to access the multiple processing centers and gather data into one cohesive picture from each of them. Though it may lead to unfinished or partially finished projects if tasks are switched too quickly.

In adulthood, this may explain women’s well-developed multitasking ability and men’s highly-tuned ability to succeed in projects that need sustained high-intensity focus. While men and women may complain of these differences, they are perfect complements of each other. The big picture, the small picture, the landscape, the pebbles. As you know, these aren’t always specific to each gender. There are many men in managerial positions who can switch from task to task. And there are many women who are engineers and programmers. They may be accessing the gray matter to sustain intense focus, and possibly, the white matter to find novel approaches to solve problems.

These gender differences, like the differences in sexual organs, are present so the genders can complement one another and increase the chance of survival.

Women and men’s brains are subjected to the same neurochemicals, but they process them in different ways. These differences show up in the intensity with which these neurochemicals are processed and how they are used in the body and brain of the gender. Serotonin, for instance, is used to slow the body down, so sleep can be achieved. It also promotes the ability to sit still, which for some, promotes increased concentration. Testosterone, though more abundant in men, helps both genders experience aggression and sexual drive. Estrogen, more abundant in women, allows for female growth and healthy reproductivity. Oxytocin assists with bonding.

Overall, due to processing differences between the genders, some men struggle to stay as still as women and they may show signs of impulsivity and aggression. In addition, men may receive less oxytocin, which may make them less likely to bond with others. Often, men may need a more targeted approach when it comes to managing their energy, aggression, and stress. In addition, more opportunities to build strong bonds should also be looked into, while women should be encouraged to release negative emotions so they do not turn these inward. This may lower depression and anxiety in women.

These differences are characteristic of the genders, but, again, are direct complements of one another. Push and pull, on and off, they are an excellent example of the perfect pairing of men and women. Women may prompt men to slow down and consider the possibilities, ie using their white matter, and men may prompt women to speed up and take more chances, i.e. using more of their testosterone.

The specific parts and architecture of the brain is the structure of the brain. Women often have larger memory centers or hippocampuses and, in addition, more neural networks within this area. This helps them take in more information from their senses and remember what 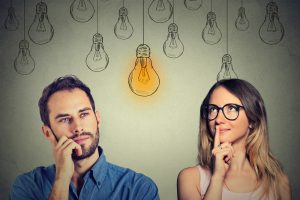 they have taken in longer than men. This helps women quickly scan the environment for any changes which may have been useful when danger was an ever-present facet of human life. Because they are able to process and absorb more from their senses, they can then access their white matter and send this information to many different processing centers, thereby creating a huge and complex web of constantly updating information.

In addition, before birth, there are differences in the brain. Men and women’s brains devote labor differently within the hemispheres of the brain. Women often have verbal stations on both hemispheres, while men’s are on the left only. This may make discussion of emotions, problems, and other things somewhat easier for women.

Brain activity tells a fascinating story of emotional disposition. Women have increased blood flow circulating through their brains due to the increased white matter, but because this blood flow may be increased in the cingulate gyrus, women may ruminate on situations that have passed and get stuck in the memories that are attached to these events. This can lead to higher rates of depression than men.

Men, on the other hand, reflect for a moment on the memory, analyze it, and then keep going. This process may also involve changing tactics and add activity to their reactions. Mistakenly, many may believe men just don’t care. This is not true. But, in many cases, the ability to keep moving is good for mental health.

These are just four gender differences of at least 100 that have been discovered. Each is fascinating and proves the magnificent bond between men and women.

Thinking About Adding Probiotics to Your Diet? Here’s What You Should Know